Is Standardized Testing Really That Important? 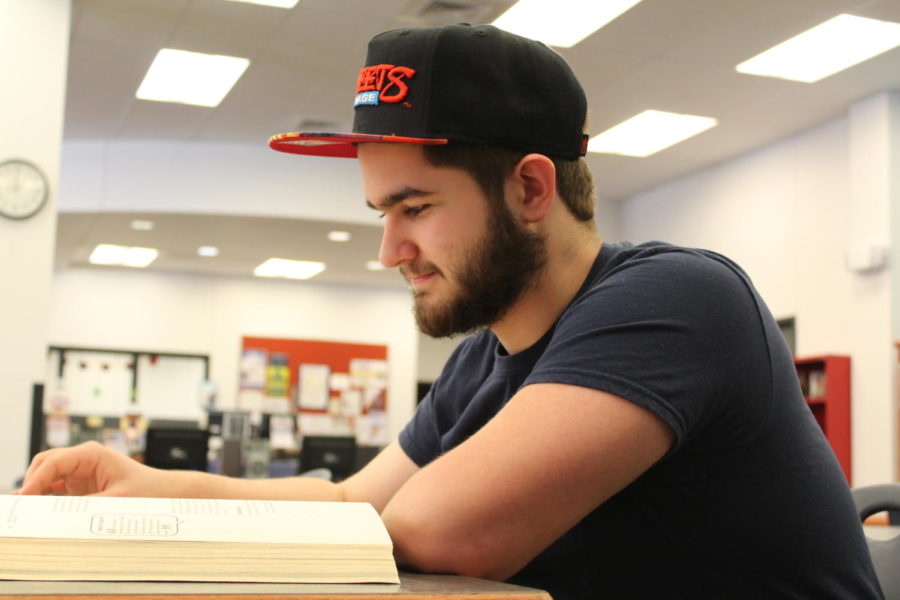 Junior Nash Gilbo studies for the SAT in the library.

I first took the ACT when I was in seventh grade. I wasn’t particularly excited to take it, it hadn’t really been my decision. Instead, it had been the choice of my parents, pressured by various teachers that thought being a semi-smart middle schooler with a fairly decent grasp on grammar means you should take a test primarily meant for seniors in high school. I did somewhat well, which started this need to watch my score climb and climb and climb until I was finally satisfied. All because of this test that wasn’t even necessary.

Standardized testing, whether the ACT, the SAT, or one of various other tests, is posed as this enormous responsibility that will determine your entire future. They’re not easy tests, they’re incredibly unpredictable. Studying for standardized tests is like stumbling around in the dark – you get an outline of what might be on the test, but nothing is certain. The prep work that you’re given for everyday classes is completely off the table, you’re all on your own. When explaining the importance of these tests, teachers and parents tend to follow a domino effect line of logic. You need a good ACT or SAT score to get into a good college, and get a good career, and fulfill your purpose. This line of thinking is toxic, don’t teach already anxious students that one failed test could ruin their entire future. Ideas like these have lead to the biggest stereotype everybody seems to believe about standardized testing – it determines your intelligence.

That’s simply not true. Completely false, absolutely illogical and entirely wrong. Your intelligence isn’t measured by a number or a letter, you’re not suddenly stupid because you didn’t do well on the science section. Everybody has strengths and weaknesses. You might be a creative type that leans more towards music and art, you might be brilliant at english but lacking in math, you might be able to name each and every president off the top of your head but can’t balance a chemical equation. That doesn’t mean you’re any less smart, it means you’re human. Hardly anyone is able to thrive in every single subject without at least some struggle, you win some and you lose some. The ACT isn’t written for creative types, it doesn’t let you focus on the areas you’re specialized in. It’s broad, spanning across the four core subjects, each one having an equal pull in what your final score is. There are individual scores but let’s face it, nobody is going to care about your 33 in reading if they see your 16 in math.

This mindset students seem to have about standardized testing being the most important thing is another flaw in the American education system. We’re not learning to learn, we’re memorizing facts that we’ll forget after our next test. We’re not paying attention because we’re excited to soak up new information, we’re listening because we want a good enough GPA to get into college. We study and study and work and work not because we care about learning, we care about this path that we’re all supposed to follow if we want to be successful.

This strict road to success is suffocating students, we’re cracking under the pressure of SAT prep books. We’re being told that the only way to get through life is to be a math whiz, when in reality things like calculus won’t be used past college. Students that seek a future in art, music or theater are scoffed at for their ambitions, while aspiring businessmen are praised for theirs. We’re being told what we need to be good at to succeed, and standardized tests that push “jack of all trades” ideals aren’t helping.

I’m not telling you not to take the ACT. I’m not saying that you should skip studying, give up on grades, rethink your entire future. I’m asking you to take a step back. Think about the last time you were excited when you stepped into a classroom, genuinely wanting to learn, and not just passively listening so that you can pass a quiz. When did the idea of school (beyond the social aspects) sound appealing to you? No test, no grade, no letter or number should ever have ability to make you feel like an idiot.

Standardized tests are built up to be the biggest test you’ll ever take, a test that requires days of studying, thousands of practice tests, and an overflowing amount of knowledge in every core subject. In reality, they’re just another test. Just another Scantron, just another set of bubbles to fill. Do they matter? Yes, as much as any other test matters. As much as you’re willing to let them matter. Don’t waste your time stressing out about impossibly high standards you hope to reach, just do your best and know that’s enough. No college, no teacher, no piece of paper can tell you otherwise.