Widlacki had to alter her daily routine after learning she had Type 1 diabetes March 17, 2017. 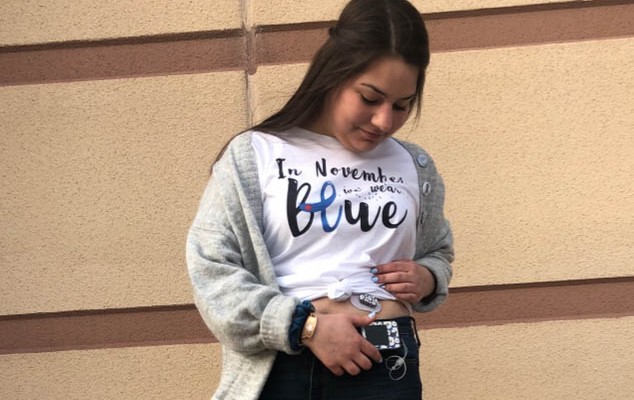 Athena Widlacki is a proud diabetic as she looks down at her glucose monitor.

As an average high school student, the day begins with the alarm blasting through their ears and snoozing over and over until they have to get up for school. Rushing through the door to try to make their bus and skipping breakfast because there’s no time. However, sophomore Athena Widlacki starts her day a little bit differently than most students.

“My eyesight was so blurry I had gotten a pair of glasses I didn’t even need,” Widlacki said.

Widlacki and her family knew something wasn’t right. On March 17, 2017, Widlacki was diagnosed with Type 1 diabetes. She experienced three weeks in a hospital learning what it meant to be diabetic, and changing her daily routine.

Throughout the day her blood sugar goes low 2-3 times. So she always carries around fruit snacks, juice, high carb, and sugary food. When a time like this happens her pump will send her an alarm warning her its low.

“When she has low blood sugar, she is very calm, almost tired, you can tell because she’s usually a really high energy positive person,” says friend Morgan Feinstein.

One of the biggest challenges Widlacki says with being diabetic is “that we can’t even help, that diabetes is so expensive.”

Insulin is the sixth most expensive liquid in the world. The insulin price has gone up from 13 cents per unit to 25 cents per unit. U.S. insulin costs per patient nearly doubled from 2012 to 2016, study finds. Not only that, but many diabetics like to use a glucose monitor, which tracks your blood sugar constantly, and can warn you when your blood sugar is low.

“I luckily have insurance but a lot of Americans don’t so that’s upward of $6,600 a year as a minimum that comes directly from their own pockets,” Widlacki said.

Widlacki concludes her day with dinner where she takes insulin and checks her blood sugar again.

“A huge part of my routine is carb counting, this includes weighing food and reading nutrition facts and a lot of Googling,” she goes on to say.

She then goes to bed, but checks to make sure that her blood level is above 100.

While sharing her story, Widlacki says that diabetes “makes you more resilient and a caring, more accepting, and grateful person because you have walked through one of the toughest paths someone can be on.”

Diabetes doesn’t get any easier by no means, which is why with November being National Diabetes Month. We celebrate those who go through some of the same challenges of being diabetic, just like Athena Widlacki.