Ok Boomer: Both Sides Of The Story

Internet meme sparks a conflict of the generations 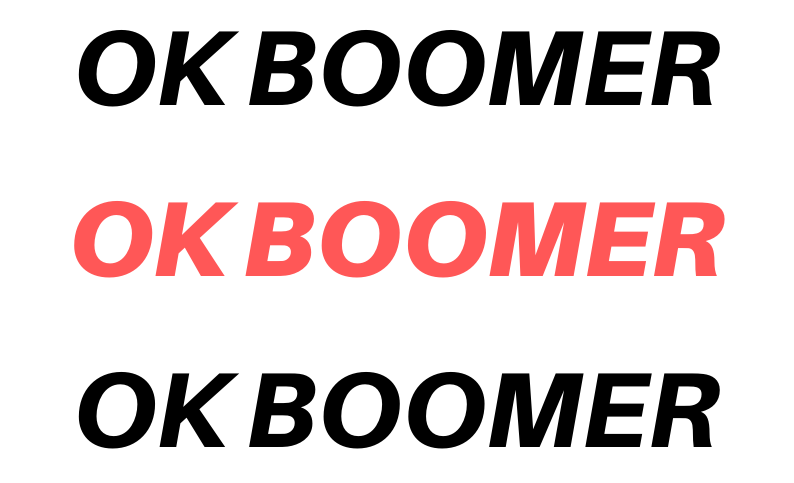 "Ok boomer" is the newly-found catchphrase of generation Z and millennials.

You’ve probably heard by now that the phrase “ok boomer” has gone global. From news headlines to angry tweets, the new catchphrase of a generation is everywhere, and it’s receiving mixed reactions.

People in Generation Z have made rap songs using the meme, while some baby boomers are marking the phrase as an ageism slur. Millennials are even involved in this generational war and defending Gen. Z. While everybody has a different opinion of “ok boomer”, we can all agree that it blew up overnight. Where did this meme come from, and why is it sparking so much controversy?

Despite how quickly it seemed to pop up in mainstream media, the origins of this catchphrase date all the way back to April 2018. “Ok boomer” was first used in response to a video of an unidentified older man claiming that “millennials and generation Z have the Peter Pan syndrome, they don’t ever want to grow up.” After not hearing the phrase on social media for over a year, it returned in October 2019.

Since then, the meme has only grown stronger, even being used in political settings. New Zealand lawmaker, 25-year-old Chloe Swarbrick, hurled the phrase toward her older colleagues who were heckling her during a climate change speech.

“Ok boomer” is being used as a sort of ‘verbal eye-roll’ to older generations and their outdated views. This is where it gets confusing for some people, because “boomer” does not refer strictly to the baby boomer generation. Instead, it is an umbrella term used to dismiss narrow-minded or judgmental older people, baby boomer or not.

“The baby boomer generation started open-mindedness,” Bertenshaw said. “They’re the ones who started rock and roll, drugs, protesting and the hippie movement.”

If this is so, then why are a good number of baby boomers offended by this simple, harmless reply?

Alex Schaper is a 29-year-old millennial. His parents are a part of the baby boomer generation.

“It might come from the fact that baby boomers are the ones who raised millennials,” Schaper said. “They want to feel respected.”

Sophomore Alyssa Motley, a member of Generation Z, shared her views of this situation.

“I think boomers are offended by this phrase simply because they believe that they are deserving of respect based upon their age, when in reality they don’t necessarily deserve anything,” Motley said. “No one is entitled to anything.”

People can speculate on and debate what makes this phrase harmful to older generations, but what most can agree on is that there’s a twinge of irony in this entire situation.

“Baby boomers seem to be the generation that likes to call millennials and generation Z things like ‘special snowflakes,’” Schaper said. “And yet, the backlash that the phrase is receiving from boomers, to me, sounds pretty snowflakey.”

While this phrase is relatively new, making fun of past generations is something that has always happened. The only difference is that younger generations are doing so in the form of memes.

“When I was younger, we made fun of the older generation all the time,” Bertenshaw said. “But we also respected the honest and sincere older people who set a good example. Making fun of the last generation is a right of passage. You kind of have to do it.”

Although all generations may never come to a final consensus, the “ok boomer” meme doesn’t appear to be leaving the mouths and heads of millennials and generation Z, any time soon.