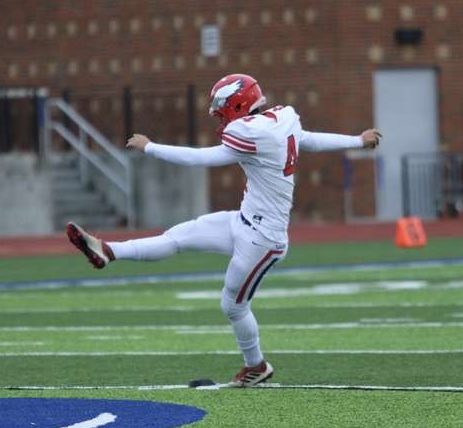 Josh "The Leg" Paubel doing one of his final legendary kicks of the season.

While the football season ended with a loss to Ladue in the state quarterfinals on Saturday, Nov. 23, this season consisted of many fantastic moments.

You can’t judge a team by only one game. Many of the highlights included the win against Timberland, becoming the Kings of the Ville (defeating both Timberland and Holt) and of course winning the title of district champions.

This season has been an unexpectedly amazing one. The Eagles finished with a 9-4 record, winning five more games this season than last year. The ‘19-’20 season was one for the books if there ever was one.

“If someone told me at the beginning of the season that we would be going to the district championship, I wouldn’t have believed them,” sophomore Alex Fillner said.

Because of this remarkable season, it’s hard to let go of the seniors who have impacted the entire meaning of the word “uncommon.” The heart and soul of the football team will have to move on after this season, but will be glad to look back upon such an incredible last season.

“It’s crazy to think about, we beat three teams we’ve never beat before and had the best season ever. It starts with our class,” senior Zach Dotson said.

The seniors have not just impacted their teammates, they’ve impacted the entire program and the future of the program. Because of this astonishing year, next year’s team and every team to come will live up to this team, this season, and this brotherhood.

“I love all my brothers,” sophomore Sam Ptasienski said.

This season is one fans, players, and coaches never saw coming, but will go down in history forever.