Black Lives Matter is a movement, not just a moment 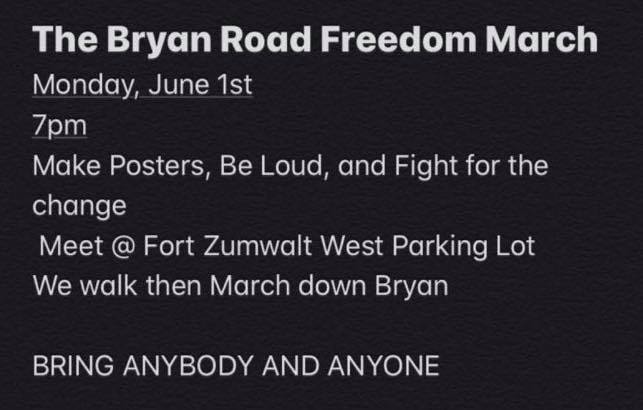 Information for the Bryan Road protest circulated around social media.

The matter of “black lives” has never been a radical one, even before the day Michael Brown was shot in St. Louis.

However, until George Floyd said “I can’t breathe,” a lot of people didn’t consider themselves aligned with the Black Lives Matter movement. In the quiet hours of quarantine, it was as if a switch flipped in the minds of many.

Suddenly, “Black Lives Matter” was at the top of every headline—you couldn’t ignore it on your Instagram feed, and you couldn’t change the topic during conversation. This new wave of activism left no corner unturned, including one we’ve all been on before: Bryan Road.

The Bryan Road protest, organized by students from Fort Zumwalt West High School, hit close to home for many people. The road is approximately three miles long; we’ve all crossed it at some point. A few Liberty students crossed it by foot on June 1 to attend the march.

“The suburbs aren’t much of an area for political action,” junior Sean Bruce, who attended the protest, said. “But the protest put the idea in our minds that we can all fight for justice, regardless of who we are.”

It’s easy to lose faith in the kind of change we want to see in our community when years of arguments at the dinner table don’t change minds or yield results. But sophomore Arthi Kondapaneni has kept going to protests—Black Lives Matter, pro-reproductive rights, and the Women’s March—for a while, and this one was much closer to home than the demonstration she attended in Washington D.C., for gun control. She described the environment at the Bryan Road protest as “powerful.”

“Seeing all those people come together for a common cause gave me chills. I truly believe that being united can bring about change,” Kondapaneni said. This demonstration was significant, especially for taking place in our community—she put it best herself: “The shooting of Michael Brown happened six years ago.. right here in [St. Louis].” Up until three months ago, we couldn’t honestly say we had come very far since. Very little has changed in our politics, and even less in the general public’s attitude.

“We need to pressure [the system] to reform the police, especially in our community, so that no more innocent lives are lost,” said Kondapaneni.

In retrospect, it appears that the realization that we’re in this together did more for the movement in our area than anything else. Bruce and Kondapaneni were juggling the same basic idea: that if we all stand together, we can inspire each other to be braver than we have been before. Bruce elaborated on this, citing his friends as an inspiration to protest.

“I decided to attend because of the overwhelming amount of my peers going. They all inspired me to come out of my shell and become a protester for such a valid cause,” Bruce said. There’s something to be said about realizing there are more of you than of the opposing force.

“[Black Lives Matter] is a movement, not just a moment. We need to keep amplifying black voices and we can’t stop until change has occurred,” said Kondapaneni. Both Bruce and Kondapaneni stressed that, as it fades from social media and fireside chats, we must be the ones bringing it back up. Even if this pushes people into discomfort, we must keep in mind that “Black lives still matter” is a necessary conversation, and not a radical idea of the young generation’s making.

If you would like to spread information, share this informational website (which includes lots of knowledge and petitions,) and has been confirmed to be created by a black person.