'The Travis Scott' is becoming increasingly popular among teens 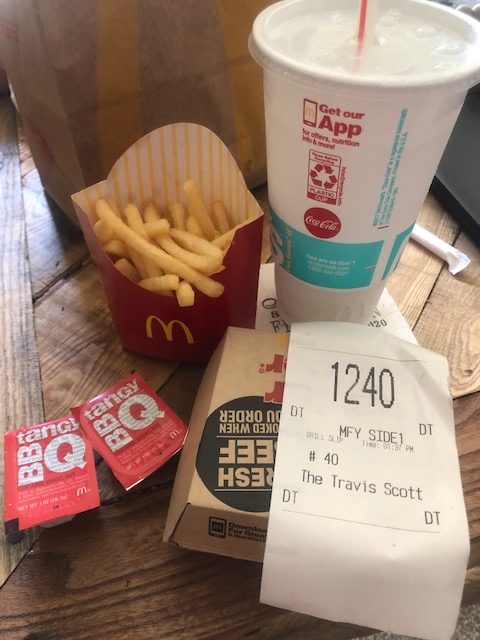 For a limited time, the "Travis Scott burger" is available at McDonalds and has been a big hit among teens.

Fans have rushed to McDonald’s restaurants to get the meal, including geography teacher, Ms. Feddersen. After a long day at work, Feddersen decided to head to McDonald’s and give it a try.

“I was a little skeptical, but it was actually good,” Feddersen said.

Jacques Berman Webster, a.k.a. Travis Scott, is one of the most famous American artists. Recently, the fast-food restaurant McDonald’s announced that a new meal would be designated in the name of the rapper.

The Travis Scott Burger is a 1/4 lbs. beef burger. The burger contains two slices of melted cheese, ketchup, mustard, pickles, onions, and shredded lettuce. The meal will consist of a beef burger, medium fries, and a Sprite.

Once she got her meal, she headed home and sat down, got her burger, fries and drink out. When taking a bite from her burger, she tasted the extra melty cheese and the crispy bacon.

“I didn’t really like the bacon on the hamburger,” Feddersen said.

After biting into the burger a couple of times, she questioned herself. If she could make her own burger, what would be the ingredients? Or what is one thing she would change about the burger?

“I would either take the bacon off or put less bacon on. My burger had a ton of bacon. Also If I could make my own hamburger, I would add cheese, ketchup, pickles, lettuce, and onion,” Feddersen said.

Fedderson wasn’t the only one who has tried the new meal. Freshman Ava Berger saw that her whole TikTok feed was filled with Travis Scott’s burger. The constant advertisements and mentions of the burger drew her to try it out for herself. She asked her mom to drive her to McDonald’s, and knew that this burger was going to be something else; she couldn’t wait to try it. While in line she was blasting “SICKO MODE” and wanting to try out the Tik Tok trend. But she was too nervous and decided not to.