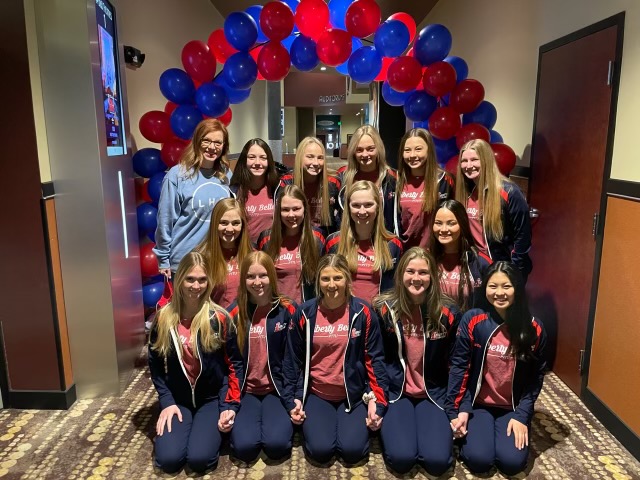 provided by the Liberty Belles

The varsity dance team had a private screening of the livestream at B&B Theatres.

Lizzie Kayser , Co-Editor-in-Chief of The Ledger

The varsity dance team placed second overall at the 2021 MDTA State Championship this weekend, winning first-place in Lyrical and second-place in Pom.

Rather than competing in-person, the Belles filmed their dances in advance and submitted them to the Missouri Dance Team Association (MDTA) to be judged. The results were announced in a virtual awards ceremony on Saturday, Feb. 27, following a livestream that played every dance.

Performing for no crowd is atypical for the Belles, used to the screaming student sections of football games and pep rallies. To keep up their spirit, they drew energy from each other.

“We all have to remind ourselves that we are here to dance because we love it,” senior Laina McMakin said. “It doesn’t matter if we have an audience or not, we still need to give it our all.”

Filming their dances took tremendous amounts of work and dedication. Apart from their typical practices, the Belles put in extra time on the weekend to record their state routines, with some days lasting up to four hours.

“The most memorable moment for me personally was filming our jazz dance for state,” McMakin said. “After we recorded for the last time that day, I collapsed to the floor in tears.  I was so full of emotion and I remember being so proud of the team that I couldn’t contain myself.”

Their love for dance was apparent as they stepped onto the floor— and it showed in the results of their competitions this season. At the Farmington Invitational in January, they took first place in both Jazz and Pom, winning first overall for Division 4. They scored no lower than third place for the other competitions of the season.

Freshman Kaitlin Stumpf fondly remembers a competition at Fort Zumwalt North. For COVID-19 safety, only a few teams were allowed in the gym at a time. Because of this, Stumpf felt a sense of unity that isn’t usually experienced at busier competitions.

“Even though you all were competing against each other, I feel like everyone was rooting for each other because there were so few people there,” Stumpf said. “Even if there was a parent in the crowd that didn’t have a dancer on your team, they were still cheering for you and I think that helped a lot.”

“No matter what the Belles were challenged with, that didn’t stop us and we continued to work hard. We never knew if a practice or performance could be our last. We could lose people because of COVID or have to stop, so we made every single day count,” sophomore Serena Bartels said. “The Belles kept going.”