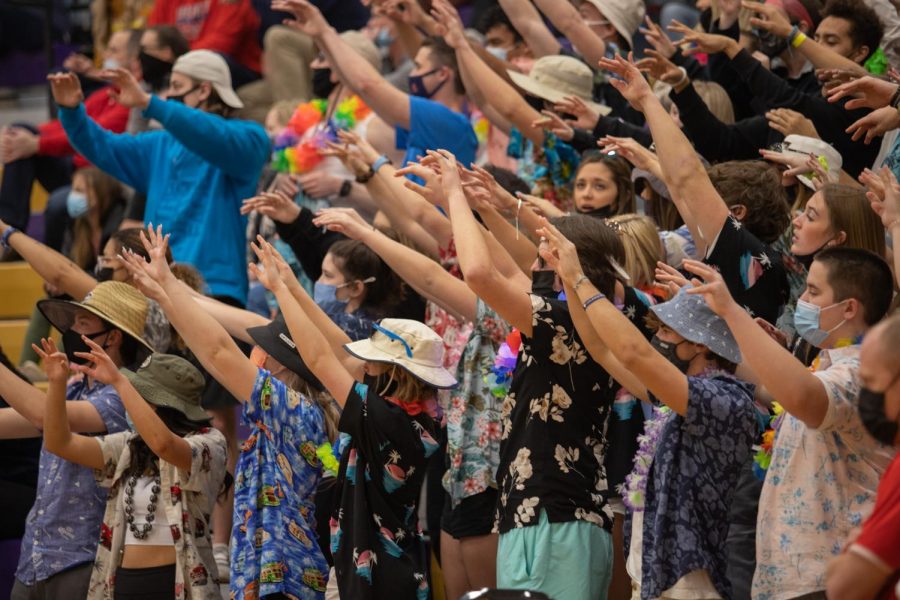 The student section goes wild as they cheer on the Eagles basketball team.

The Eagles took on the Troy Trojans at their home court on Friday, March 5 in front of the first student section any sport has had all year. The game was tight in the first half, the Eagles leading 20-18 going into the second, but in the second half the Trojans got after it and won the game and the district title, 65-50.

In the first quarter, the Trojans started the game fast, scoring easy buckets over the Eagles’ defense, but after Coach Sodemann called the team in for a time out, the boys came out as a completely different team. They hustled and brought the score up to match Troy’s while locking them out with great defense. At the end of the first quarter, the Eagles had come back, but the Trojans led 13-11.

The second quarter carried the intensity and both teams were neck and neck, playing smart offense and making good shot selections. On the defensive end, the Trojans and Eagles were putting the work in, making it hard for the other to score. The Eagles led at the end of the half, 20-18.

The student section went crazy throughout the half, anything from congratulating players to heckling the other team. This game’s spirit section made up for lost time. Blake Seaton led a cheer at every possible chance with the rest of the students roaring right there with him.

“It was the first time being able to have a student section and I’ve never felt so at home when we were at an away game,” junior Tess Roberts said.

When the third quarter started, the Trojans went on a run, outscoring the Eagles 24-9. At the beginning of the fourth, the Trojans were winning 42-29.

Although the Eagles had slipped a little in the third, they came out with the intensity of the first half in the fourth, trying to make up the loss of points in the last quarter. The Eagles scored 21 points in the fourth quarter, but couldn’t hold the Trojans on the defensive end. A hard fought game by both teams ended up in a Troy win, 65-50.

No matter what was happening in the game, the student section never went quiet, cheering for their team regardless of the scoreboard. As the final minutes of the game ticked down, the stands did a thank you cheer to the seniors in the program.

“It’s bittersweet,” senior Anna Decker said. Even though the Eagles didn’t bring home the district title this year, the seniors, both on the court and in the stands, finally got a taste of the senior year they should’ve had.