The drama "The Crucible" gives seniors a spectacular last show 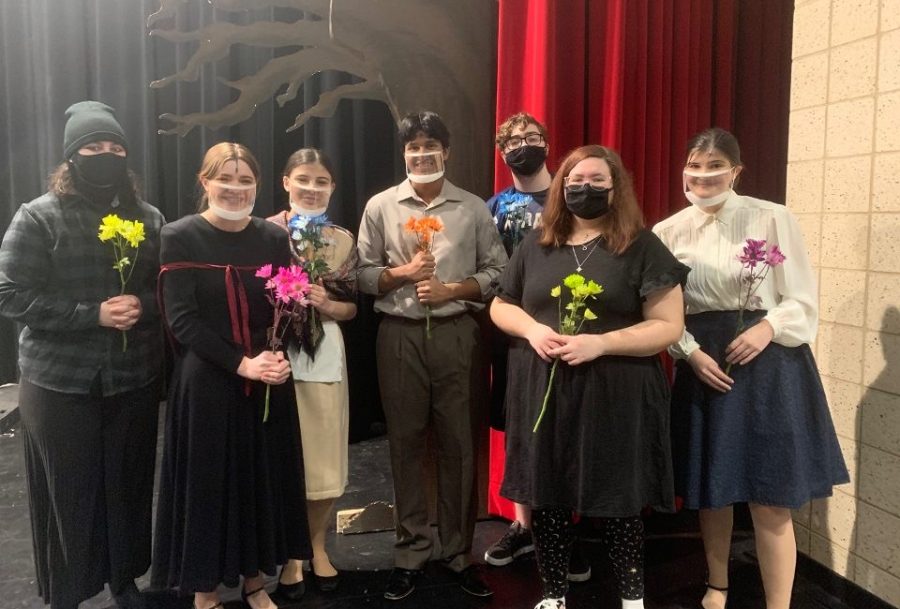 The original plan was for the one-act “Anne-Arky”(October), “The Crucible”(March), and then the last show was supposed to be “The 25th Annual Putnam County Spelling Bee.” Plans changed when the senior-directed “Trail to Oregon” was set to perform in late January. There isn’t enough time to perform the additional musical, so it has been canceled; it also doesn’t offer any streaming rights, it would not have been able to be shown to the masses. And so, “The Crucible” will be the last senior show for Huffman, Kadam, Inan, and Grant.

“I really do love musicals, but I feel very content with this being my final role,” Grant said. Kadam feet the same, saying, “I’m totally fine with this being my senior show, we just have such a great cast and crew this year so I know it’s going to be good,” Kadam said.

There’s always so much emotion that comes with any show: nervousness for performing, frustration from trying to get everything perfect, and the happiness once you finally do perform, and as always the sadness once the show is over. For the seniors, there is a “bittersweet” emotion that comes over everyone as this isn’t just their final show; this is them bowing out of high school.

“The show coming up so soon is bittersweet – I love this show, and this cast, and this role is an absolute pleasure to play, but it’s my senior show, you know? Like, this is the last time I’ll be up on stage here, and it’s just a bit sad,” Huffman said.

The seniors are also leaving lots of other things behind such as memories and people they’ve met along the way.

“Everyone has such a fun personality and never fails to make me laugh. I will also miss Gehrke a lot. She’s always been strong support for me,” Grant said.

Gehrke and friends have helped the seniors grow in their journey, off and on the stage.

“Being in theatre has helped me grow by allowing me to feel better about who I am. I feel welcome in theatre and I feel like I’ve also grown as an actor,” Grant said.

The seniors are ready to take their place in the world, ready to plant new roots and gain a new perspective.