Mr. Hendricks Travels To The Dominican Republic To Work For the Royals 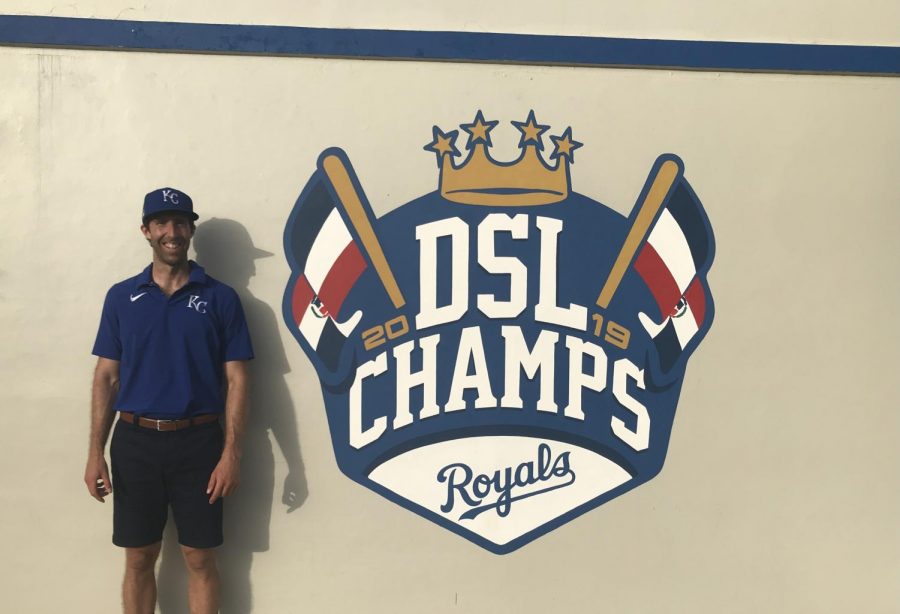 Mr. Hendricks stands in front of the team's clubhouse. They won the Dominican Summer League in 2019 and they're the reigning champs since last season was cancelled.

Every summer up until now, I have worked at my second job at Whole Foods, but when I was presented with the opportunity to spend 10 weeks in the Dominican Republic (DR) as an intern with the Kansas City Royals, I knew it was a once-in-a-lifetime opportunity that I could not pass up. Being a Spanish teacher and former college baseball player, it was a no-brainer.

Each year the Royals bring down two to four interns, generally college students, to their academy in San Antonio de Guerra, a small town about a half hour outside of the capital, Santo Domingo. They are here for the majority of the Dominican Summer League (DSL) season, which in normal years has 72 games that stretch from early June to late August. This year, however, due to the pandemic the number has been reduced to 60 and the first game is not until July 12, so I will be present only for the first month of it.

Each MLB team has an academy in the DR, where they bring in players from Latin America where the signing age is 16; the age range for players here is 16-20 years old and currently they come from six different countries (Dominican, Venezuela, Mexico, El Salvador, Nicaragua, Aruba). Latino players comprise almost a third of all MLB, with the Dominican Republic (10%) and Venezuela (8%) having the largest share.

The DSL is the lowest level of professional baseball and the chances of any player making it to the major leagues are very slim. It is essentially the equivalent of Division 1 college baseball. To reach the majors, he has to advance through four levels beyond the DSL: rookie league, A, AA, and AAA, each being better than the last, so he must stand out and outperform the competition at every stage.

The players primarily have practices and/or games during the mornings and then in the afternoons they have English and American culture classes to prepare them for when they (hopefully) go to the U.S. The academy has dorms, classrooms, a cafeteria, in addition to all the baseball-related facilities. They are here, on average, for eight months out of the year, separated from their families and loved ones. This may seem grueling from our American perspective, but the vast majority of players come from extreme poverty with little education, and baseball is seemingly their only hope out of that life.

I am currently one of four interns, all of whom are university students; one attends Nebraska, another Vanderbilt, and another MidAmerica Nazarene in Kansas City. In the mornings we begin by helping film the pitchers and cut the film to send in to the scouts/coaches. After, we set up cameras for the games or scrimmages and use various computer programs to record stats. All of this information is used to evaluate players and inform management so they can decide whether a player moves on or is released. In the afternoons, I help teach the players English. Collectively, as a side project we are taking pictures of every player in his jersey and are making baseball cards for each one.

In my free time, I mostly workout, read, or catch up on movies/TV shows that I missed during the school year. We have gone into Santo Domingo one time, to the historic Colonial Zone (a UNESCO World Heritage Site), which was really fascinating. As the first city in the New World, all of the buildings are extremely old and I certainly learned a lot about the origins of Dominican culture. I love to travel and was hoping to see more, but Santo Domingo has a curfew in place due to COVID that extends (as of right now) through the rest of the summer, so I expect my exploring to be limited.

Additionally, we visited an orphanage that the academy has partnered with, “Casa Amor” (Love House), and this was truly a humbling experience. I had never been to an orphanage before, and to go to one in a third world country was something else entirely. Most of the players grew up poor, but at least they had their families.  A lot of the children at the orphanage were there because their mothers were either too poor to provide for them or sadly did not want them. Yet I found that these were some of the happiest children I’ve ever been around; they simply wanted attention and to feel known and appreciated.

This experience has been great for me and I’ve truly enjoyed it thus far. For many of these players, this will be the highlight of their lives, and it is really special to be a part of it. I am forging new friendships that hopefully will be lifelong and I hope that I can make an impact on some of them. I am hoping as well to continue these connections and incorporate some real-life lessons into my teaching for this coming year and beyond.