Eagles Fly Back To The Nest For Home Opener 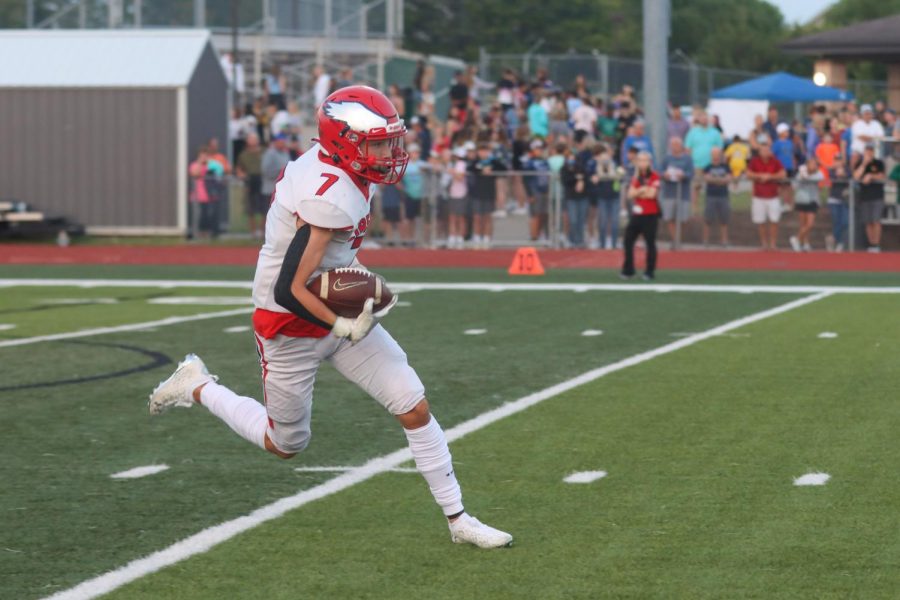 Sophomore Peyton Bertels ran the ball on a kick return against the Timberland Wolves.

***Follow Friday’s live streamed game here
The Eagles have gone 665 days without a fan section at a home game, and this Friday the Nest will be packed. The Eagles are facing the Trojans for this season’s senior night and first home game.

The Trojans are ranked in fourth place, behind Timberland, in the GAC rankings. The Eagles are ranked at 13 in the conference, but only two games have been played this season for both teams, so anything can happen.

“I had a fun experience at Troy, but I’m very happy to be a part of Liberty,” Jolliff said.

Troy has won both games they have played so far this season. They won against Fort Zumwalt South 44-7 and Warrenton 72-12. Liberty has a record of 1-1. They defeated Warrenton 28-14, but lost to Timberland 61-12.

This home game is also senior night for the Eagles, with the ceremony starting at 6:30 p.m. for football players, dancers, and cheerleaders.

“I’m so excited, especially to walk with my parents because they have done so much for me. It means a lot that they can see my hard work pay off,” four-year varsity dancer Bella Bahr said of the ceremony before the game.

The Eagles will take on the Trojans tonight, at home, on their senior night. The students will be showing support by wearing white for the White-Out theme for the first home game of the season.