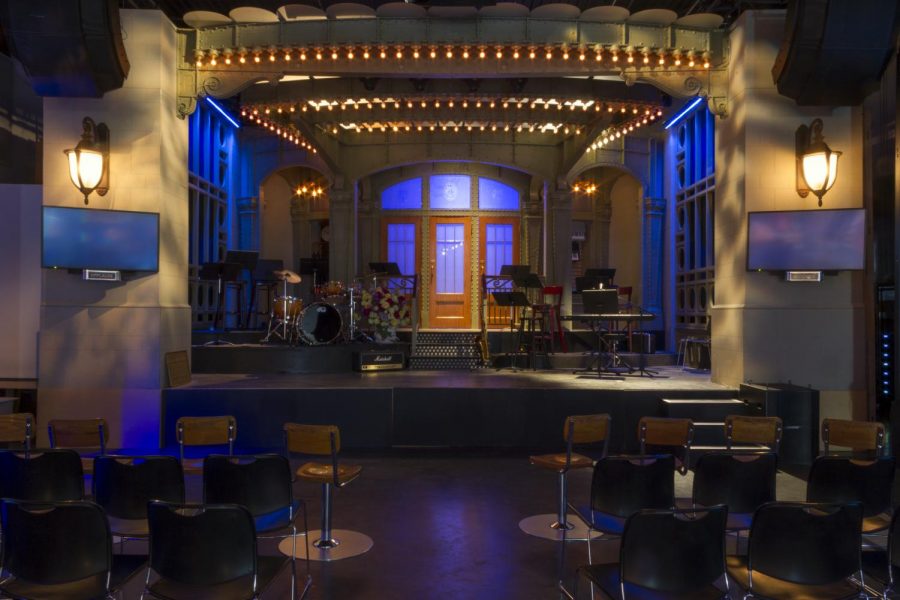 For 46 years, movie stars, musicians, and comedians have taken on the role of hosting "Saturday Night Live."

“Saturday Night Live”, a show that first aired in 1975, has remained at the front of our nation’s collective media consciousness for better or for worse. Recently, however, a new lineup of comedians and hosts has breathed new life into the decades-old production.

For anyone who may be unfamiliar, ‘Saturday Night Live’ is a late-night comedy show consisting of sketches, music videos, a musical guest, and a weekly celebrity host. The show is performed live each Saturday night on NBC at 10:30 p.m Central Time. The show came from humble beginnings with a more variety show format, where cast members would perform sketches, along with solo, stand-up, and comedic music. The show has come a long way since then, now equipped with fancy cameras, an all-star cast, and A-list celebrity hosts. Most viewers were in shock when billionaire Kim Kardashian recently took to the stage, not realizing that SNL had gained that much influence in the pop-cultural scope.

More and more celebrities have stepped up to the comedic plate to take a swing at live comedy. The show no longer has to rely on mildly successful former cast members to host each season. Executive producer Lorne Michaels still brings back heavy hitters like Eddie Murphy and Adam Sandler, but recently the show has attracted TV and film stars. Adam Driver hosted one of the most successful episodes in recent years with Star Wars-themed sketches and a career day premise, seemingly out of thin air. The political sketches have also died down a bit after the 2020 election which may have enticed viewers to come back to SNL.

SNL has also regained the dry humor it seemed to be missing since the departure of Andy Samberg and Will Forte. A trio of season 47 featured cast members forming a comedy video troupe called “Please Don’t Destroy” has filled in for the greatly missed group “The Lonely Island.”

The past few seasons have also given us four young comedians who have made such a big splash on the show, who will probably be replacing long-standing players like Kenan Thompson, Kate McKinnon, and Aidy Bryant when they choose to move on. Bowen Yang, Chris Redd, Chloe Fineman, and Pete Davidson have been the main attraction for younger viewers to tune in each week. Pete Davidson’s comedy speaks to the mental health issues of today’s youth, Bowen Yang serves as a role model for queer teenagers across the country, Chris Redd provides a voice for black youth in America, and Chloe Fineman is an example of a successful woman in comedy.

Some naysayers of the show claim that “SNL has become too political, it’s not funny anymore.” But Saturday Night Live has always been a show of political and social commentary. Press conference parodies and politician impressions are necessary to keep the show relevant and inform viewers about politics in the show’s own comedic voice. Even before Alec Baldwin’s Trump Impression became the go-to political sketch in people’s minds, Will Ferrell did a President Bush impression, Darrell Hammond did a Bill Clinton impression, and Tina Fey did a Sarah Palin Impression. The 2016 election sketches effectively soiled the name of modern SNL in the minds of Gen-X and Baby Boomers who saw it as a definite left-lean. But SNL also used to lean into more conservative humor, mirroring the social scope of the time it existed in.

This constant evolution, rebirth, and change are what make “Saturday Night Live” timeless. From Mr. Robinson’s Neighborhood to Rap Round Table, SNL has always and will continue to make us laugh for generations to come.