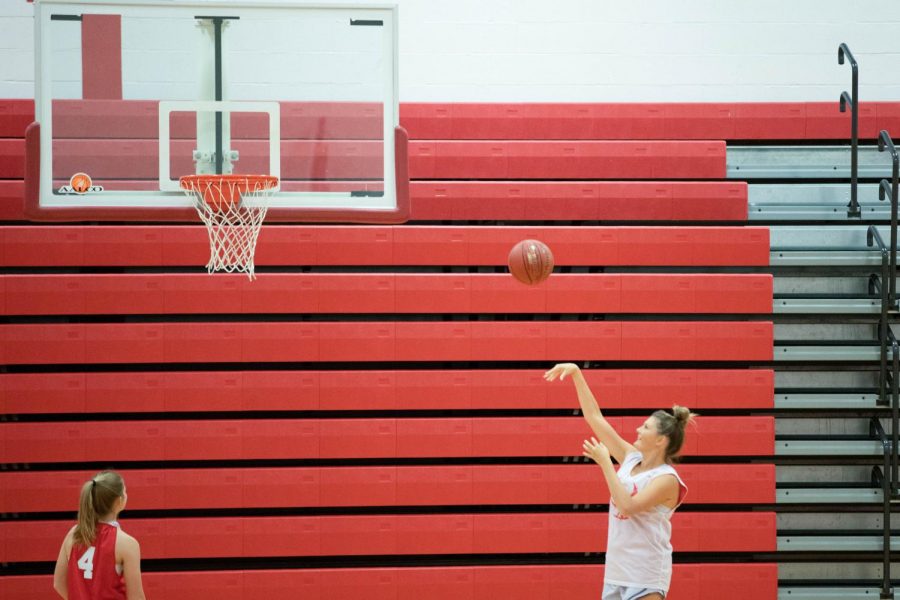 Emily Northcutt (11) takes a shot during team practice on Nov. 3. “We are athletic with having so many upperclassmen and are looking to play fast and aggressive,” Coach Walterbach said.

Gavin Block, Reporter
Girls Basketball
Similar to the other sports last season, the Eagles girls basketball team struggled with restrictions on the number of fans at games as well as difficult quarantines. Highlights that year included victories against Winfield, Bowling Green, and Washington. Liberty completed the season with an 8-16 record.

This time around, the stars seem to shine brighter for the Eagles. The squad premiered their latest jerseys in a preview video titled “#TEAM7” released on Monday, Oct. 4, along with the line: “New Uniforms. New Team. New Season.” It is said that “#TEAM7” refers to the fact that this will be Coach Walterbach’s seventh season mentoring the girls basketball team.

“We have new kits and new players coming out this year which will be fun; we also will have five seniors,” Walterbach said. “We are athletic with having so many upperclassmen and are looking to play fast and aggressive.”

Regarding factors that have helped drive the team, he remarked, “We have a core group of 10 players (freshmen to seniors) that came to everything in the offseason.”

Tryouts will be held from Monday, Nov. 1 to Wednesday, Nov. 3.

The team’s opening matchup will be at home versus Fort Zumwalt North on Wednesday, Dec. 1.

Boys Basketball
The varsity boys basketball team certainly seems to have great potential this year. Coming off of an 8-12 season where they made it to the district championship game, the team has been gaining experience and new talent along the way.

Gabe McCrary (since graduated) and current senior Jaden Betton respectively obtained 14.8 points per game and 9.6 points per game. Current junior Nathan Bobikiewicz had the most rebounds with a total of 68. The season included wins over Clayton, Fort Zumwalt South, and district rival Timberland later in the year.

Since there were limited fans that year due to COVID-19, the Liberty team is hoping to show everyone what they are truly capable of this winter season.

“I am excited for the upcoming season,” said Coach Sodemann. “I expect that our team will be focused, intense and tough when we practice and play, as well as our upperclassmen to lead by example and our younger team members to buy in to how we do things.”

When asked what factors the team is looking to improve, he noted, “I always look to see if we are improving. Basketball is a long season and there are lots of ups and downs. If we are always trying to be our best and improve each day, then the wins and losses will take care of themselves.”

Tryouts begin on Tuesday, Nov. 2, and conclude on Thursday, Nov. 4.

The Eagles’ first game will be a clash at Timberland on Tuesday, Dec. 7.

Wrestling
The boys wrestling team has set the bar quite high going into this season, after winning conference titles the year before, including the GAC Central Conference Championship. It was the first time the Eagles won conference since being crowned co-champions in the 2015-16 season. They also had four wrestlers qualify to state in March: now graduated Wyatt Haynes, Jackson Ward, Lukas Aubuchon, and present junior Matt Craig. Ward received his 100th career win on Jan. 28 against Fort Zumwalt East.

The Eagles are looking to defend their conference title this year. They will have to train hard in preparation for the GACS as well as other tournaments they will be participating in.

The girls wrestling squad is looking to be equally ambitious this season. In the year previous, they competed in the GAC Championships, Liberty Invitational, and St. Clair Classic among others. They also faced off against Lebanon and Wentzville rivals Holt and Timberland. They will hope to capture a championship this winter and build up their modest reputation.

Lillia Clay (11) is proud to be a girl involved in wrestling. “Being a girl in wrestling allows you to break boundaries and inspire others,” Clay said.

“I enjoy seeing our team grow in numbers and in skills,” girls wrestling player Elektra Lowe (11) said. “This year we have more wrestlers on our team so there will be more opportunities for practicing with a variety of weight classes and having a bigger team also allows for a bigger cheering section.”

Lowe noted that they want to win as many championships as possible this year, including Liberty’s Invitational Tournament along with the GACs, Districts, and State for those who qualify. “I am looking forward to seeing our team go all out and grow with every match. Win or lose, as long as you give it your all that’s all that matters,” she said.

Wrestling practices will be held every day after school from 2:30–5 p.m.

Girls Swim
To say that the Liberty girls swim team had a successful run in their previous season would be an understatement.

The Eagles soared by clinching the GAC Championship for the sixth consecutive time. In the process, they broke a total of six school records. They completed the season with a winning record of 7-3.

10 girls from the Liberty girls squad were selected to state, making it six years in a row that the team has progressed to there.

In terms of this season, the girls swim team will be working hard under the pressure of their past achievements. They will continue to train arduously in order to improve even further this season, and it is very likely that they will not disappoint. The anticipation this winter is sure to be great as the team looks to earn the title of seven-time GAC champions.

Girls swimming and dive practices will begin the week of Monday, Nov. 8, and then be every day after school.

The team’s first faceoffs will be a tri-meet at the St. Charles YMCA, with a swim dual at the Hannibal YMCA coming subsequently.