Working In The Woodshop 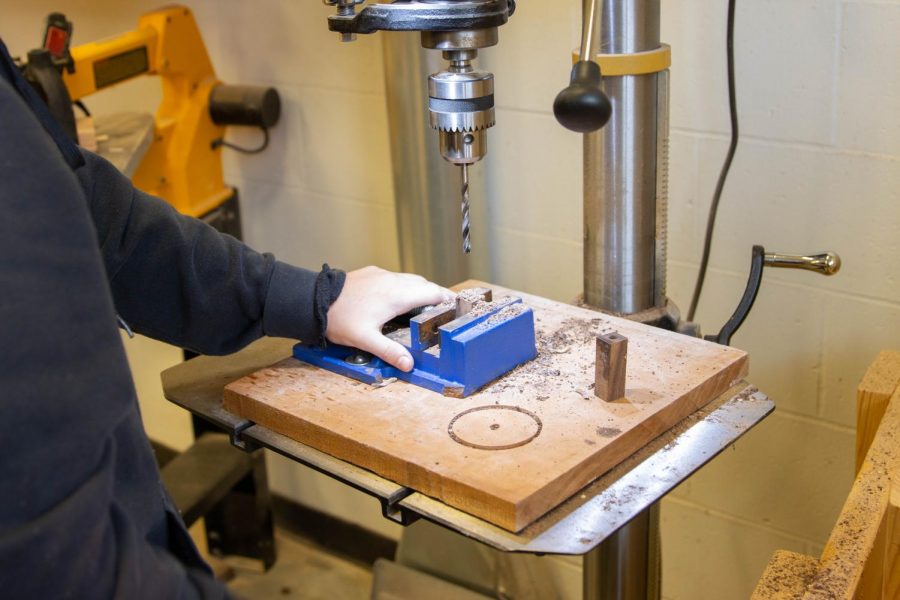 One of the students in Woods I constructs a pen.

If you’ve ever wanted to build wood projects or learn how to manage a home, Mr. LaBrot is the person to talk to. LaBrot teaches students how to work in the woodshop in room 309.

“I get different groups of kids. Some years I get a lot of kids from the art department,” Labrot said. Not only do the kids learn from LaBrot, but he also learns from them. “It opens me up to seeing projects in a different light too.”

LaBrot offers three different classes involving working in the woodshop. Woods I is a basic class where you learn how to work with all the different machinery. Woods II is for the more advanced wood makers, using mostly hand tools. Home Management is for all the students who want to be self-sufficient when it comes to fixing their homes.

LaBrot also mentioned that he only has nine girls in all three of his classes combined. This is an unexpectedly large number in comparison to previous years. “Most years I have about two or three throughout my day.”

One of LaBrot’s students, Berkley Lamarque (9), is currently making a pen from scratch.

“I think the pens are really cool and I’m definitely going to be using them a lot.” Lamarque is in Woodshop I, which is an all-year class.

Tess Roberts, who is also in Woodshop I, is the only girl in the class.

“It’s fun because I’ve never met anybody who’s in the class and it got me to be friends with a bunch of underclassmen.”

LaBrot explained that his Woodshop I classes go through a safety unit, builds cutting boards, pens, and picture frames in the first semester. This, along with Woodshop II, is a very hands-on class.

Junior Vito Signaigo said his favorite project was making the cutting board. He got to use all of the different machines on one project.

In Woodshop II, you start the year by building mallets, which you will use for later projects. In the class Home Maintenance, the students go through different units which start with electricity and move on to plumbing. You get to cut PVC pipe and learn how to drywall.

You’ve probably seen the works of the Woodshop classes all around the school without even noticing. In the past, Woodshop was in charge of making the props for theatre and pieces for the Homecoming dance.

Lamarque also made sure to mention that “(LaBrot) is really nice. This is definitely my favorite class.”