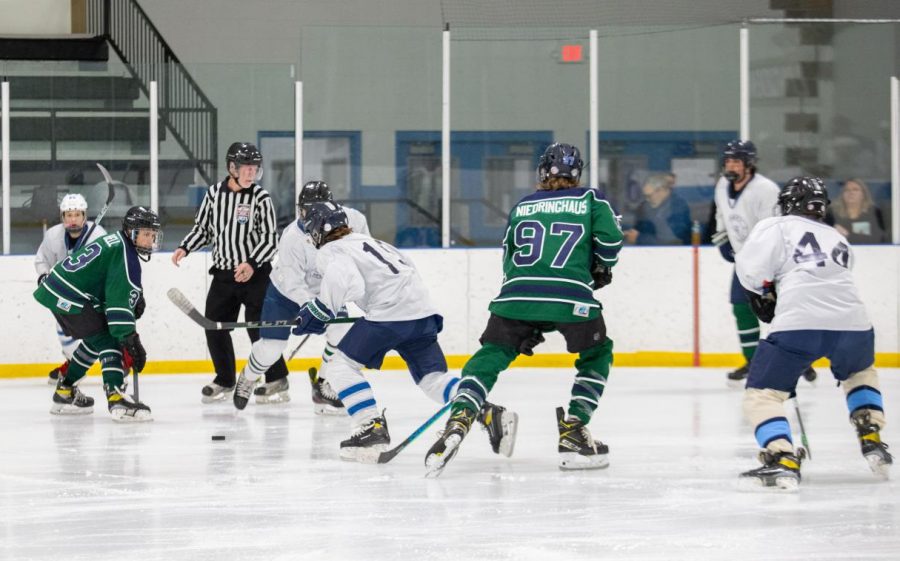 Greyson Howarth (far right) and his teammates battle for a loose puck.

There is a new sport at LHS that is creating excitement among the school community. Our school now has a representative hockey team that was established this school year.

The team, which was formed from a Facebook group this summer, has already played two games. They defeated Timberland in their first, and tied Fort Zumwalt West in the second. The group is made up of 23 students from Liberty High School and Frontier Middle School, and practices every Thursday.

“The team looks really good and it’s exciting to be on a team for a school,” sophomore Zach Chandler said.

Prior to this season, students from Liberty who wanted to play high school hockey had to play on Timberland’s team.

The team is still in its early stages and the coach and team members are still finding out strengths and weaknesses. However, some members have already played together on different teams creating a stronger bond. They are currently playing other teams in nearby schools, with more official games starting this spring.

“It was really fun to see everyone show up to play,” sophomore Jordan Pelphrey said about the Eagles’ first practice. “Everyone was really proud that we finally had a team to represent.”

“The coach is really understanding of our different levels but still pushes us really hard to improve,” Pelphrey said.