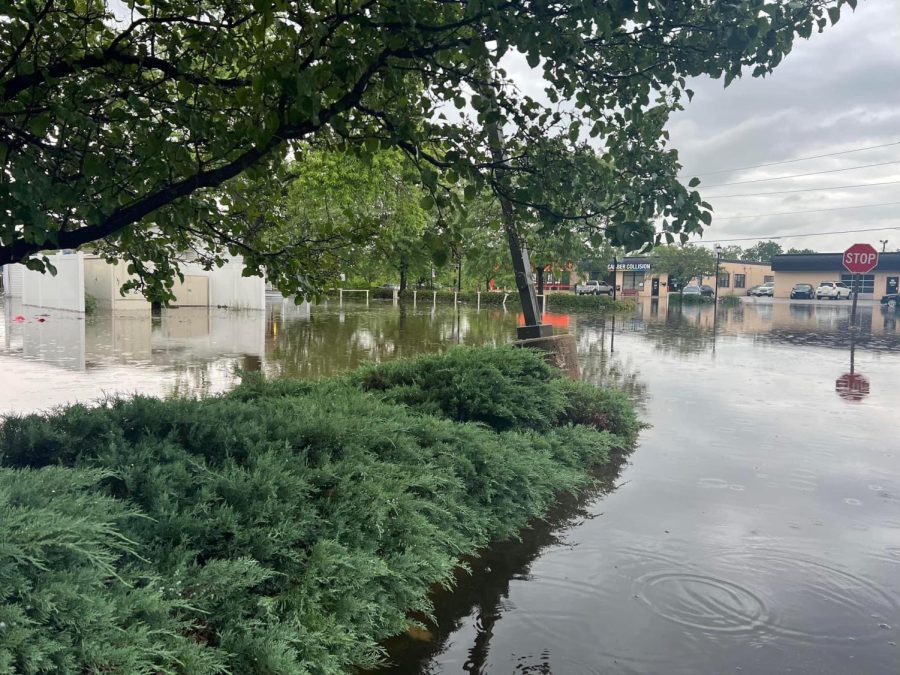 An anonymous resident captures an image of rainwater flowing through St. Louis roads on Tuesday, July 26.

Citizens of St. Louis and surrounding areas awoke early Tuesday morning to witness nearly a foot of rainwater surging through streets, collapsing roofs, and enveloping vehicles. Innumerable residents’ homes were overrun by the flash flood, while many were forced to flee their submerged homes in inflatable boats.

Massive thunderstorms struck St. Louis beginning late Monday night and continued throughout Tuesday afternoon. By 7 a.m., the city had broken its 24-hour rainfall record of 6.85 inches remnant of the Galveston Hurricane of 1915. By Tuesday night, rainfall averages varied across city lines from 6 inches to over 1 foot.

St. Charles County received some of the highest rainfall amounts, totaling about 12 inches for the day. Some residents experienced a significant amount of water in their basements.

“I live in O’Fallon, and my entire basement flooded. It was filled with 3 inches of mud because our pump broke,” Liberty junior Sydney Davis detailed. “My parents have had to order a driveway dumpster to throw away all of our cardboard boxes and anything else impacted.”

First responders rescued more than 100 people from their flooded homes and vehicles across the region. St. Louis Fire Chief Dennis Jenkerson spoke at length about the historic damage at a press conference on Tuesday.

“We’ve had a tremendous amount of cars that have been door-deep and also roof-deep in some of these low-lying areas,” Jenkerson said.

At least one person is confirmed dead after a car in St. Louis was found covered in more than 8 feet of water. Additionally, 10 puppies drowned at Stray Paws Adoptables in St. Peters after the building was flooded. The rescue group is now asking for volunteers and donations to help with restoration.

“Communities throughout our region were devastated by last night’s record rainfall and flooding,” Jones said. “My heart goes out to all those families who were impacted, and I remain in consistent communication with our partners at the county, state, and federal governments. This declaration of emergency will help us get the resources we need to begin our city’s recovery.”

Multiple closures and cancellations were enacted as result of the flooding. The Fort Zumwalt School District canceled all summer programs for the day, the Gateway Arch closed, the Muny postponed its Tuesday performance of “Legally Blonde,” and the yearbook summer workshop at Ladue Horton Watkins High School was delayed by two hours.

The Wentzville School District did not report any flood damage to district buildings or facilities, though the REACH Adaptive Learning Center was closed and some summer camps were canceled for the day.