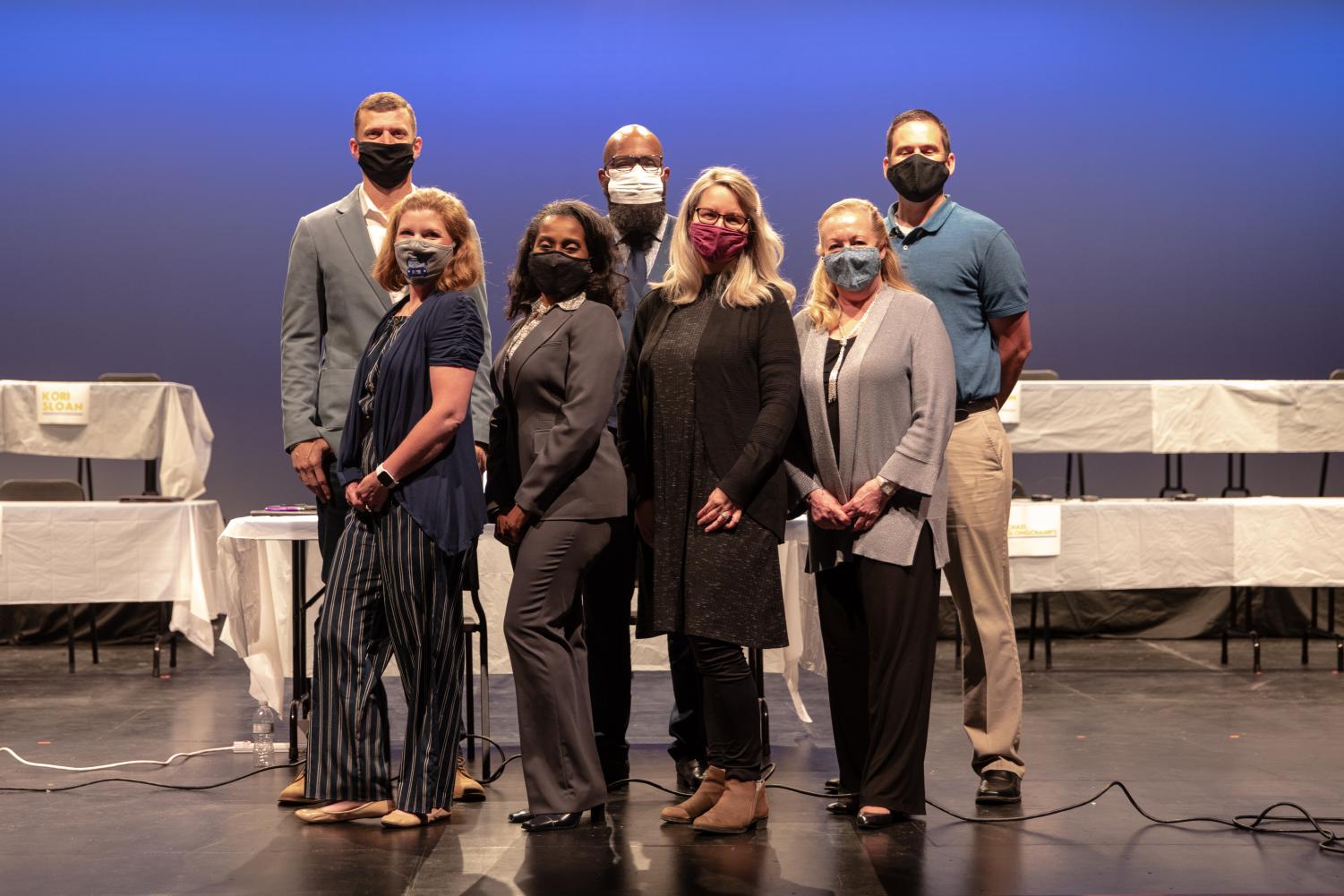 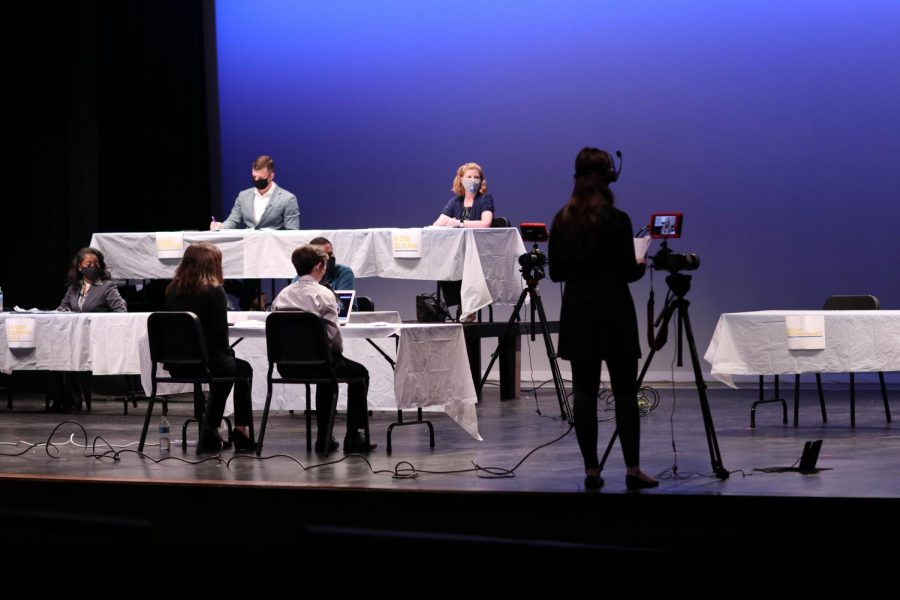 Paige Bostic stands, posted at her camera filming a candidate on the right side of the stage

There were only two spots to fill on the board, with eight candidates vying for each leading up to Election Day on April 6. Seven of the eight came to the event, including: Brad Buchanan, Kori Sloan, Jason Goodson, Cheri Purpura Thurman, Shannon Stolle, Donald Looney, and Lashun Coleman-Hale. This event was originally supposed to have a live audience, but due to COVID-19, it was streamed on the Liberty lhsstreaming YouTube channel.

“This idea was supposed to come to fruition on a smaller scale last year before the pandemic happened,” senior Lizzie Kayser said, who was one of the event moderators. “It was supposed to be a much larger group of students working with one of the principals to plan, and I don’t believe it was going to be broadcast(ed). We had only a few meetings before we were quarantined, so I’m not really sure what it would have looked like.”

Ianne Salvosa, a senior, was a part of the original plan before COVID-19.

“Last year, Dr. Kiesel assembled the leaders of each club to put on the Town Hall. We got pretty far in planning, but didn’t get to actually execute the event due to COVID-19. This year, Mr. Hall approached Rhett [Cunningham] and I one morning about the event (after the district had reached out to him about it),” Salvosa said.

The event took place on March 30, each crew member came early arriving at 4-5 p.m. As each candidate arrived, they were immediately required to have their temperature checked. Then, Sean Bruce and Lizzie Kayser introduced themselves and took the candidates back to the dressing rooms. While in the dressing room, Bruce and Kayser mic’d up each candidate and spoke with them individually. By 6 p.m., every candidate was ready on the stage, and the event began.

After the moderators, briefly introduced themselves and the event, each candidate had the chance to speak on what they want to do for the district and how they felt about various topics in the school district.

The first round of questions began seven minutes into the broadcast, and each candidate was given 90 seconds to answer a question concerning COVID-19 and what they wanted to do differently. Questions followed as each candidate was given a chance to speak and explain how they feel about certain issues including COVID-19, diversity, and how they want to overcome challenges students and staff face.

When asked what she would have done differently regarding COVID-19, former educator Thurman said, “As I see COVID, I see it as a dark cloud that descended on our world as we knew it.”

Round two began with a specific question to each candidate, and they were each given 60 seconds to answer. These questions included topics such as unfair policies, technology, growth, mental health, budget cuts, future population growth, student needs and transparency. This round of questions was specific to each candidate, based on what they focused on in their campaigns.

After round two, a 10-minute break was put into session. This was the time given for students, staff, teachers, and members of the Wentzville community to submit questions they have for the candidates through a form linked to the broadcast. These questions were asked place in the third and final round, and each candidate had 2 minutes to reply. These questions included staff and student support, proudest moments on the board, class sizes, cutting costs, promotion of acceptance, donation of funds, and rules for general safety of students.

To finish off the event, each candidate was given 30 seconds for a closing statement. Many showed credibility of their campaign and expressed gratitude towards the Liberty students for giving them the opportunity to speak on their campaigns.

“To all candidates, we wish you the best of luck in the upcoming election,” Kayser said closing the event. “Thank you for joining us, and goodnight.” 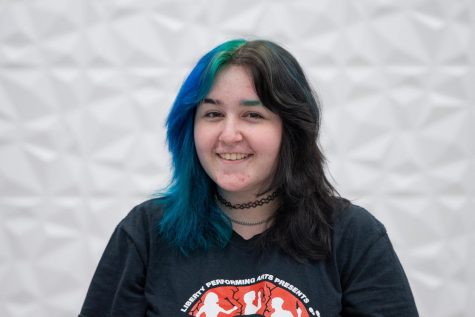 Sammy Knickmeyer is a junior in publications and theatre student. In school, she is stage manager of the drama club, secretary of GSA, a photographer/reporter...

Town Hall: A Behind The Scenes Look 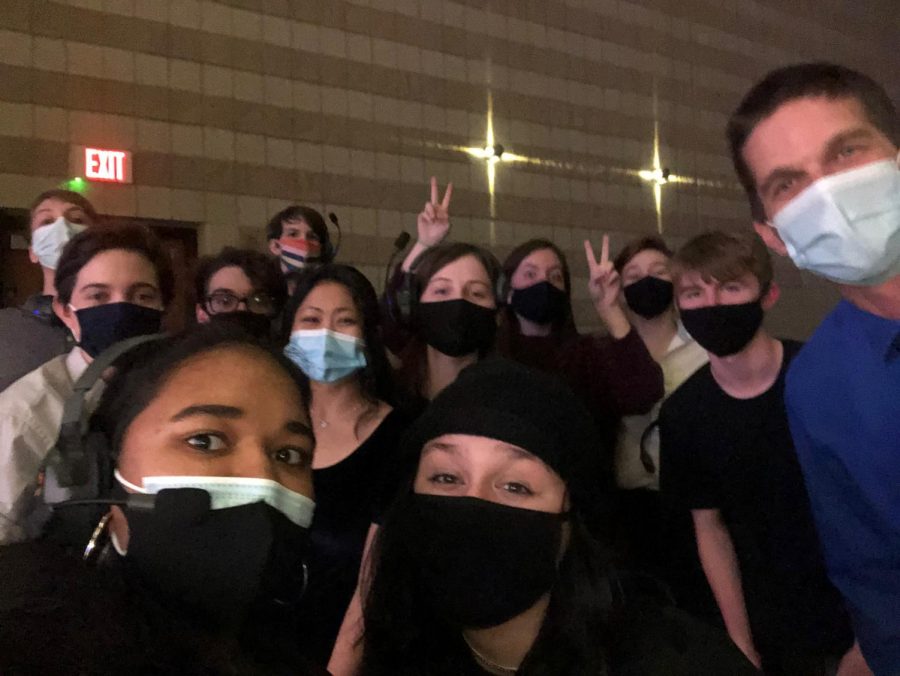 Crew members celebrating after striking the set for Town Hall.

The Town Hall Meeting was revolutionary for the Liberty publications program.

This event gave students a voice and chance to show that they are powerful and intelligent. Not only did this event help the students and voters, but it also helped the school board candidates tremendously. They were given the opportunity to listen to students, parents, and teachers and answer their questions. This possibly could have persuaded many people to go out and vote in the election. With a lot of planning and each crew member worked hard to make sure the students and candidates were heard and given the opportunity to ask questions, the event went spectacularly.

The crew behind the event included nine members each doing a different job needed for the broadcast. Due to COVID-19, the Town Hall could not be held with a live audience, so the broadcast served as a live and unedited event. The crew included:

“The idea was originally created last year for the 2020 Board of Education (BOE) election,” Sruthi Ramesh said. “Due to the pandemic, we were unable to follow through. But now in hindsight, it was almost a blessing. This time around, publications was asked to lead it. With the live streaming experience that we have been gaining throughout this school year, we were so prepared to take on this challenge, and I think this group effort was absolutely amazing.”

The event was originally planned before COVID-19, but had to be continued the 2020-2021 school year due to restrictions being lifted. Sean Bruce and Lizzie Kayser, the moderators for the event, did research on each candidate to make sure they were asking relevant questions.

“In the days leading up to the Town Hall, I was feeling super excited,” Salvosa said. “Our whole organizing team was working really hard during the workdays and rehearsals and I was able to see the whole thing come together. I felt a bit of stress as well because it kind of hit me that this was the first time this type of event had been produced in our district and I wanted to set the bar really high.”

Different responsibilities were assigned to each crew member based on what they liked and felt most comfortable and confident doing.

“We sent out an interest form to the magazine and yearbook staff and asked them to rank the committees in the order of their interest in them. Then, considering their preferences and their individual strengths, we placed them in their committees.” Salvosa said. “Rhett and I communicated with the candidates and set up the whole committee system. We planned the stage set up and all the fine details of the event. Our Livestream committee, Jayce, Ben, Paige, and Sruthi, was in charge of manning the livestream and creating the livestream graphics. The Advertising committee, Paige and Sruthi, was in charge of making and distributing promotional materials for the event. The Moderating committee, Lizzie and Sean, had the responsibility of taking our Town Hall topic survey responses and picking out the three most common topics to form into questions. They also researched the candidates and their platforms to come up with individual questions that were tailored to each candidate. Lastly, our Production committee (Jackson, Alix, and Cara) were in charge of the staging (mics, lighting, sound) and also manning the timer during the event.”

Each crew member came an hour or two before the event began. They each started setting up the cameras, broadcast equipment, microphones, etc.

Each member worked hard to stay quiet and focused during the event. The livestream went smoothly and any issue was solved immediately by the hardworking students.

“I like doing live events where the pressure is high and we have never done anything like this before so it was fun to start from scratch,” Cunningham said.

The Town Hall broadcast had more than 5,000 views as of Election Day on April 6. It has the most views of any video that LHS Publications has hosted on their YouTube channel, lhsstreaming.

Sammy Knickmeyer is a junior in publications and theatre student. In school, she is stage manager of the drama club, secretary of GSA, a photographer/reporter...