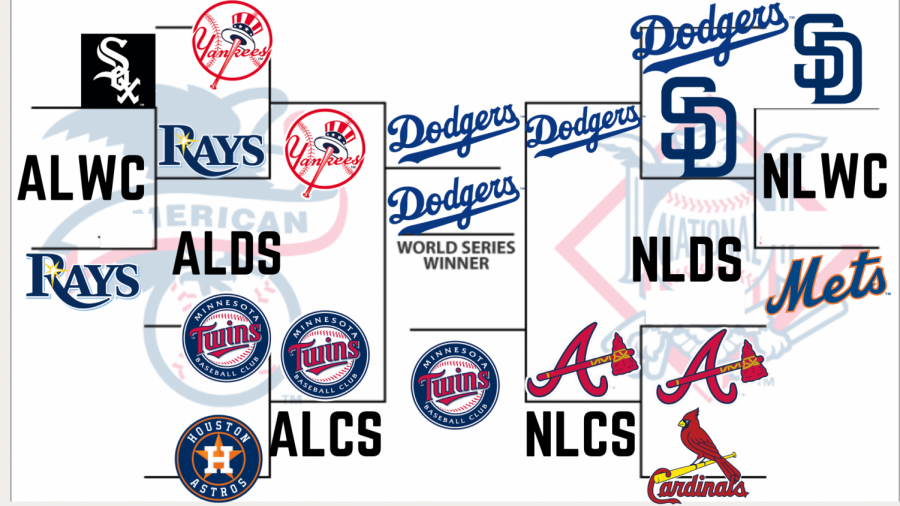 Created on Canva by Brett Cira

Can anybody beat the Dodgers?

The 2021 MLB season is right around the corner and it’s time to talk about predictions. This season is going to be exciting, back to 162 games and big moves have been made. The World Series-winning Los Angeles Dodgers went out and picked up Cy Young winning Trevor Bauer because they weren’t already good enough. The Padres brought in pitchers like Blake Snell and Yu Darvish and are looking to be a favorite, but are just stuck being second in the NL West because of the Dodgers. The NL East is looking very competitive this year with the Mets picking up big pieces like Francisco Lindor and the Braves are as strong as always. The playoff field this year may be one of the strongest groups of teams we’ve seen in a long time. Here are my predictions:

I’ve got the Braves taking first place by a win or two over the New York Mets. The Mets made some incredible moves this year and are one of the best teams, but I think they’ll need a year or two before the team starts to thrive. With one of the best starting rotations in baseball, this could easily be a team that makes it far. In third I’ve got the Nationals along with the Phillies and the Marlins fourth and fifth. The Nationals are a solid team, but they aren’t on the level of the top two and don’t count out the Marlins, they could have another miracle season and win a decent amount of games.

This division is tough. Easily the weakest division in baseball, but one of the most competitive. The Cardinals picked up Nolan Arenado, which is a huge win for the team, but I’m still not sold on the Cardinals. They’ve got room to improve, but they will win the division over the Milwaukee Brewers. The Cubs lost multiple players this offseason and aren’t looking good at all. The Cubs finish third, with the Reds in fourth, and the obvious, Pirates last. Although the Reds are fourth on my predictions, I think they’re a super underrated team after losing Bauer, but the offense has got to pick it up.

Although the Padres are very strong this year, the Dodgers should easily come in first. You can’t just not pick the World Series-winning team who picked up the Cy Young winner. The Padres would be a legitimate playoff threat if they didn’t have to play the Dodgers. Some have them as the second-best team in baseball.

Another super strong division with three playoff-worthy teams, the Yankees, the Rays, and the Toronto Blue Jays. With the divisions being so stacked, it puts insanely good teams like the Padres and the Rays in the Wild Card, which makes it hard for teams like the Blue Jays to make it in. If we were looking at the best 10 teams period, the Blue Jays might be in it. The selling Boston Red Sox will come in fourth with the Orioles who are getting better, still in fifth.

This is a hard decision. The Twins are stacked and they have been for a while, but the White Sox are making all the right moves. Long-time Cardinals manager Tony La Russa comes back to coaching to be the manager for the White Sox. This team is bound to do great things, but I’m taking the Twins in first place. Another team making all the right moves is the Kansas City Royals. They’ve had one of the best offseasons and it’s not very often we see a low-tier team go out and grab a bunch of solid players. Pickups like Carlos Santana, Andrew Benintendi, and their young pitchers beginning to move up the ranks, they have come to compete for third place. The Cleveland Indians lost star player Francisco Lindor and although their pitching is still strong, I’m taking the team on the rise, the Royals for third place.

I feel like this is one of the least talked about divisions in baseball. The Astros are on the decline, but should win first place pretty easily with a mediocre A’s team coming in second. The Angels cannot find a way to get better season after season, they should be in third. Not a whole lot going on for these teams this year, but the Astros could make a playoff run if hot. The Rangers are quickly becoming one of the worst teams in baseball and the Mariners, who I have finishing fourth, aren’t doing much better.

I really think the White Sox are a better team than the Rays, but I also think everyone underestimates the Rays now that they lost Snell. My gut told me to take the Rays here. I have the Twins beating the Astros and the Yankees. The Twins are a really solid team and we usually see a break-out team in most postseasons. The Yankees typically find a way to always lose, so I took the Twins in the ALCS to get back to the World Series. You’ve gotta have at least one bold prediction.

In my opinion, the St. Louis Cardinals are the only team on the NL side of the bracket that I think isn’t worthy of making the World Series. Every other team is insanely stacked, but one is more stacked than everyone else, and that’s the Dodgers. I went back and forth on the Mets and how they’re going to do and I can’t see anything more than a first-round exit. However, I do believe that they can win their division, which is not on my predictions. Like I said, the NL side is super strong this year. The Padres just can’t do anything when stuck playing the Dodgers. They’re such a good team and will never get to show it off. The Braves are going to have a quietly good postseason run, we kind of expect it, so nothing unusual. We all know each other’s picks for the World Series and that’s the Dodgers. Unless they have a ton of injuries or something crazy happens, nobody has them not going back to back. They are just too good.

This is the most excited I’ve ever been for an MLB season in a long time. Last season was actually fun to watch, but it’s time to get back to business, back to the 162 game season. There were so many crazy changes this year and I’m so ready to get the season started. It’s going to be a super competitive year for the good teams, anything can really happen. These are my predictions, I can’t wait for the season to be back. 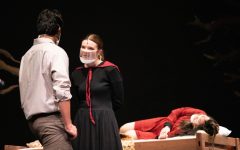 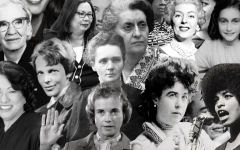 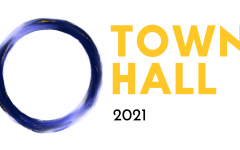 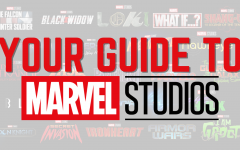 Your Guide To The MCU

Brett Cira is a senior and this is his first year in publications. He plays baseball and enjoys watching and keeping up with a lot of the major sports....